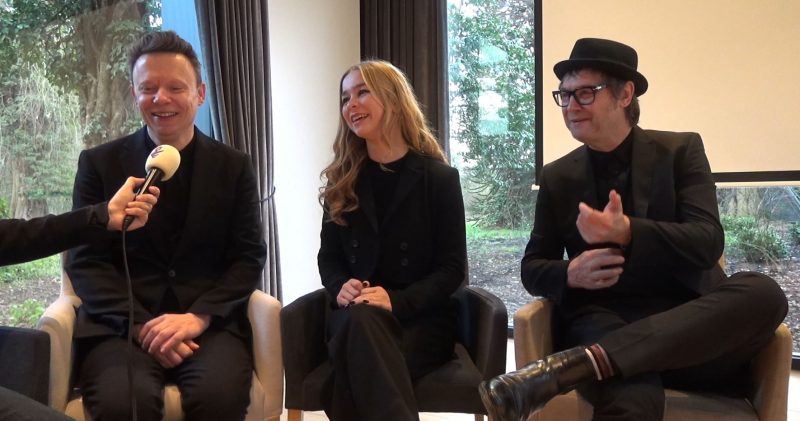 Hooverphonic tells Songfestival.be: ‘My way or the highway’

Belgium was the first country to announce their artists for Eurovision 2020. Flemish broadcaster VRT are sending Hooverphonic to Rotterdam coming May. Because the group is so famous in Belgium and Europe, expectations are high. At their annual party celebrating the new year, OGAE Belgium, invited Hooverphonic and our team could talk to them.

Whenever you ask somebody what they expect from Hooverphonic, they all have the same answer. Everybody is expecting something special from this band. So when we sat with them, there was that one question that had to be asked. How about the song? ‘The song is ready, but it had to be perfect and it took nine mixes and needed to be remastered a couple of times. But now I’m happy, so it’s finished’, Alex told us.

On the question when the song would be released he said: ‘It depends on a couple of things, like when the video is ready. Whenever that is finished we get a clear view on when the song can be released. But it will not be released during the MIA’s ( annual awardshow for Belgian music, red).

’We talked with Duncan Laurence and he said that the hardest part is to keep calm. People have to refocus quick because the time between two acts is so small that it could become hectical. You have to find your inner peace before you have to start that first line of the song’, Alex continued. About the act there was not much they wanted to share: ‘Without spoiling too much I can say that it will be something that fits the style of Hooverponic. That’s all I want to say about it.’

#Eurovision, @hooverphonicoff is coming for you! Interview online soon. #openup

‘I’ve been a fan of Eurovision for a long time’

Hooverphonic has been around for almost 25 years so when we asked why they made the decision to represent Belgium now, Alex says: ‘A lot of people think that’s special but in fact I watch the show every year, sometimes with friends and some food. Only last year I had to be at a party for a friend that turned fifty. I can tell you that I used the bathroom more then on other occasions. I was able to see Madonna’s weird performance and was home just in time to see the results. If I saw what kind of a rollercoaster of emotions that segment of the show brings then I hope our hearts will be able to take the pressure this year. Last year I actually agreed with the way the public voted and not with the jury. So our goal is to impress them both.’

‘You have to believe in what you are bringing to the competition. You have to put your mindset on going to that final and not doubting the chance that it could be possible,’ Alex said. ‘I don’t know if people know but we already had a couple of changes in our leadsingers so you can see that we are really dedicated in what we do. Everything that we plan to do we do it all with passion and dedication. That is one of the strong points of this band,’ Raymond Geerts continued.

’My way or the highway’

Broadcaster VRT is putting their trust in Hooverphonic. They get the artistic freedom they need and Alex explains us how they experience this liberty. ‘Very easy, it’s my way or the highway. I don’t believe in compromising in music. In our daily life we have to compromise once in a while but as an artist I don’t believe in doing so. You have to have a strong opinion and make sure that what you want is what you will get. If we have to ask for everybody’s opinion then you end up with a lot of compromises. That is also being committed to something because now if it would go wrong in May, the only ones that can be blamed are us. But that is a risk we’re willing to take and supports our view on dedication.’

‘Eurovision is going back to evolving around music’

Hooverphonic has been on VRT’s shortlist for some time but never said yes so when we asked Alex why they did now he said: ‘Because now is a good time. It is focussing on the music again. In the nineties I wasn’t a big fan of the music of Eurovision but since the victory of Salvador I was more and more convinced that it was right time to say yes.’