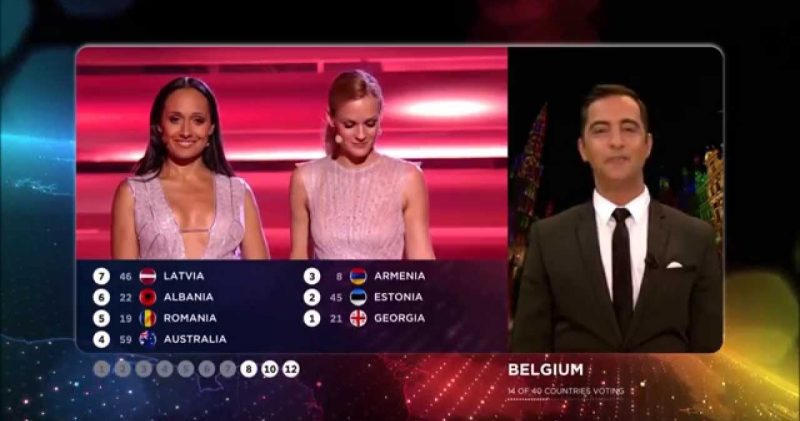 10 televoting is read out

Eurovision.de, the official German Eurovision website, gives some details of free from the conduct of the new scoring system which this year is entered in the Eurovision song contest.

Starting from this year, the five-member jury by country and the viewers at home apart from one to twelve points. As mentioned earlier, the vote in two parts . Initially follow the results of the 43 separate juries, which the spokesperson only twelve points for reading and the other items will automatically be displayed on the screen.

Afterwards follow the points of the viewers at home. That are by country. All the points that a land of other countries got, come in a blow to the scoreboard. Today Eurovision.de made known that the presenters, Petra and Måns Zelmerlöw, only the results of the top-10 of the audience will read, ending with the winner of the televoting. The points of the other sixteen countries are automatically on the screen.

Most likely we will also during the broadcast still know how the Belgian and Dutch viewers voted. Digame, the German company that since 2004 all televoting in all countries, will the individual broadcasters deliver the televotingresultaten from their countries, so that even right before the end of the show can be disclosed by the national commentators.

Finally, Eurovision.de reports that the list of jury members per country will be released on 29 april . In Belgium is this year the VRT to convert five music experts to sit on the Belgian professional jury. Friday is the long-awaited start order expected from the semi-finals, which initially would be already released last Tuesday.

A YouTube user has a nice movie made in which the scoring from last year, with the system that starting from this year. If you already have an idea of how the vote will be concrete. Please note: in this movie are the televotingresultaten still be published separately by country. That will not happen in Stockholm.

Sietse Bakker, the event supervisor of the Eurovision song contest, told in a comment that the precise method will look even further. ‘ The results of the countries that are not in the top ten finish, will be more announced. That way, there is more tension and the pace is also good. How exactly will look like, we will have to see. We also want each country an overview on the screen of their televotingresultaten. That way the viewer at home will see what happened with his voice. The detailed results are published via the app and the website anyway, ‘ says the Dutchman who detractors recommends the new system once to undergo before commenting.