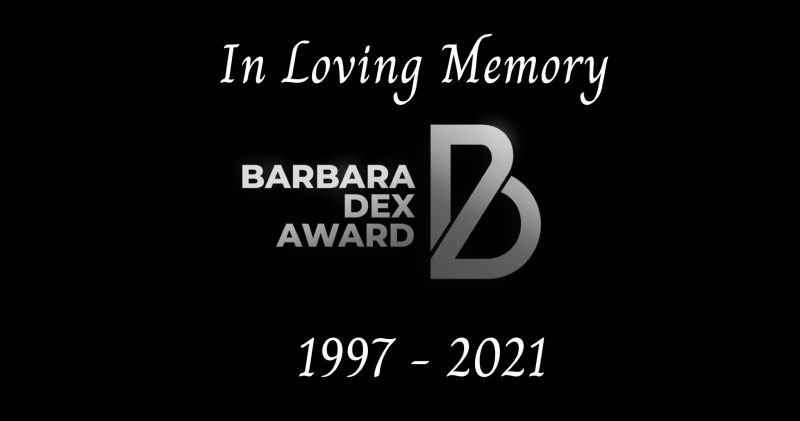 Barbara Dex Award: The end of an era

Yes, you read that right! We are canceling the Barbara Dex Award. Together with you we will look for a suitable name for a new, more positive award. You can read more about it in the article below.

What started as a ‘joke’ in 1997 and was still around in 2021? Indeed, the Barbara Dex Award. 25 years ago the Dutch fansite House of Eurovision created this award in ‘honour’ of Barbara Dex. Barbara represented Belgium in 1993 in Eurovision wearing a dress she made herself. While her song didn’t get people talking, her outfit was the talk of the town. Four years later, in 1997, the Barbara Dex Award was born. The House of Eurovision decided that this award would be given to the ‘worst dressed’ act of that year in Eurovision.

In 2017 we, Songfestival.be, took over the award and all that comes with it. From the moment we had full control over it we tried to change the connotation of this award. We never liked the term ‘worst dressed’ so we attempted to change it to ‘most notable outfit’. As you can all imagine, rebranding something that has been around for so many years is not an easy task. For the last four years we have been doing everything in our power to turn down the negative but… we failed! There is only one thing left to do for us: we will put an end to this award. There will be no more Barbara Dex Award in 2022! No worries, however, there will be a new award coming this year.

Why is there a problem?

As said before, rebranding a brand that has been around for so many years is impossible. The last thing we as a website want to do is to hurt people. In the last couple of years, the negative comments towards us and the award convinced us that it is now time to stop the award in its current form as its name will forever be associated with something ‘ugly’. 2021 has been the last year for the Barbara Dex Award because after 25 years it’s now time to move on. Talking about moving on: we already have a plan to create something new, not just us but together with Eurovision fans from all over the world.

We want to create an award that celebrates rather than puts something down. That’s why we want to create an award for the most notable outfit. An outfit with a story and with a meaning behind it. Only one small detail is currently missing… a brand new name for this award. We want you to help us create a new, positive name that will usher in a new era of celebrating diversity, culture and storytelling. Instead of choosing a new name for the award ourselves, we’re going to ask you, the fans, to provide us with ideas for a name.

We will do this in two voting rounds. For the first round, we ask you to send us ideas for a name, along with a small motivational statement explaining why that name would be a good fit. The name will of course have to have something to do with the Eurovision Song Contest. We will collect them all and announce a selection of up to twenty names that are most suitable. This is to prevent people from trying to resubmit Barbara Dex, which will be banned from the selection anyway.

In the second voting round, we will have drawn up the list of up to ten possible names and then it is up to you to vote for your favourite. The name with the most votes wins and will be the name for the new award, which will be awarded to the act with the MOST NOTABLE outfit after the Eurovision Song Contest 2022.

When are we doing this?

Here’s a schedule of when what will happen:

Send us your favourite name in the form below!