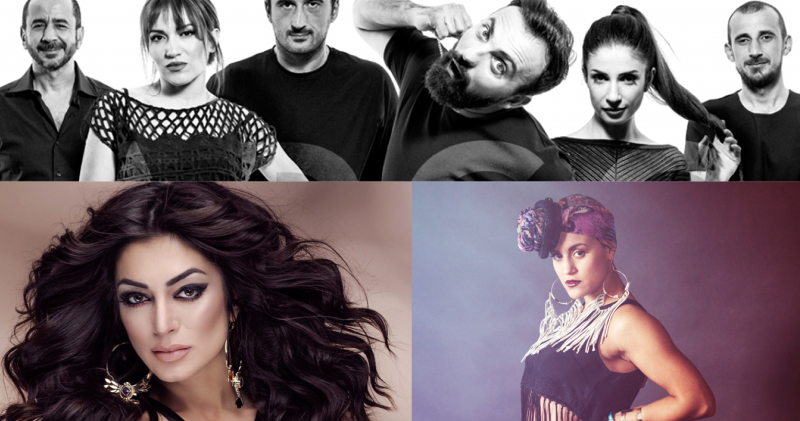 DSVS: Our experts have to say about Greece Armenia, Finland &

All countries will be assessed in alphabetical order, and that is why we start with Armenia, Finland and Greece.

Stijn de Guzman: for her intro took out Iveta the mustard Adeleclearly at. Unfortunately, the comparison stops there. She sings not bad but her vocal lash out can appeal to me much less than that of the British. The song is a Armenian potpourri of different music genres which I sigh when her lovewaves reach the coast.

Fabian Faber: It is special, an outsider, something vernieuwds. Often the speciallekes on a song contest just not accessible enough to the general public. Not a bad song, but I fear that this song will not enough coming in to most viewers.

Sam Jacobs: The song starts off very difficult, but contemporary. After half a minute it draws is very striking and successful. The chorus is quite monotonous and unfortunately sometimes also noisy. Hopefully that live not too much of a good thing. The voice of Iveta makes me think of certain notes at what Anastacia. The pieces with the duduk I find very beautiful. They draw as far as I am concerned the song to a higher level. Can score well, I think.

Fabio Ponente: I love the melody and the classical and rock influences! This number gives meaning to review. Is this a Eurovision Song? Classic not seen, but that should certainly not always followed! For me, this is a very good song!

Roy Van der Merwe: The song starts nice but then comes a sound wave that made me really blew away. It is all a bit too. I have a lot of trouble getting the English-language text to follow, making it just as well could be sung in any language. Last year I found Armenia well, but I’m not sure if they can do as good as last year.

Finland: Sandhja – Sing It Away

Stijn de Guzman: A tough-looking girl who sings a cheesy pop song, the Finnish response to Miley Cyrus so. The song is one of a dime a dozen but I confess that I was happy. Towards the end, I humde all the chorus all along as a Frisky Colt in the discowei.

Fabian Faber: Although this number may not be the most awesome stanzas, however, know this song me to grab and hold in its chorus. As soon as that for the first time, it gives me the feeling of not being able to sit still. And that has a good song. It should catch you, whether that’s in its simplicity, or by wanting to dance. On a song contest, that is a very important factor and I think Finland has in itself.

Sam Jacobs: This I find on each plane rather mediocre and unconvincing. Just like Armenia a bit noisy, but less of this time. It seems to take aim at hits by John Newman & co., from a couple of years ago. The ‘ UH UH uh “in the Middle, they may also omit as far as I am concerned. The song is best melodic, but hesitate to the cheerful disco draw card. Thereby it jumps out. The clip makes me fear that it also visually not really striking from the corner will come, but that is of course still await. A gray mouse so, this Sandhja, but fortunately an uptempo-mouse.

Fabio Ponente: A happy uptempo song with disco influences, and peppered with recognizable tunes. For me this is not bad, but it is anything but refreshed and surprising. I am hot nor cold.

Roy Van der Merwe: I knew every song would be an improvement compared to last year’s submission. I read excellent reviews about the songs in the Finnish selection, whereby I had high expectations. And Yes, Sing It Away Aina mun pitää is much better than last year, but still it can not keep my attention. The Finns Have their final weggezongen opportunities? It is certainly no song that I often want to review with pleasure.

Stijn de Guzman: The song begins with a stretched lament and that is the prelude to a three-minute Greek tragedy. The English text has the same depth as the nursery rhyme ‘ hat of paper ‘ and the rap is similar to that of Uncle Konstantinos as he too much to the ouzo has been sitting.

Fabian Faber: This is a song that me nothing does. Is it just the weak choruses or stanzas that me doing nothing? Maybe the combination? It does me little to nothing. Even with a strong act cites this song not final …

Sam Jacobs: The song of Argo begins a little arcane and promising. The mix of traditional sounds and the modern rapstrofes does work, I find. But the chorus is there too much. The chamois is sweet and irritates. It is might also be to the English text. I prefer that I do not understand the language than English phrases that I hear that bother me. But anyway, there could be a nice act when and if we the chorus be wished away, it may musically for me though.

Fabio Ponente: I’m a big fan of the Greek influences. They always give me the immediate feel like dancing! This song does a nice melody, but unfortunately a little monotonous. I had actually expected more. The voice of the woman is also straightforward to me of this song to be able to enjoy as I would like.

Roy Van der Merwe: I like the title Utopian Country great, but the song title is not 1000% better than the song itself. The video clip is urging me not to go to this Utopia . I want to see this in color , and maybe also without someone who seems to run away. An ingenious way of stage setting would be the number can still jacking, but currently does nothing for me. I have not at all feel like this again.

Tomorrow our experts assess the entries from Hungary, Croatia and Moldova.