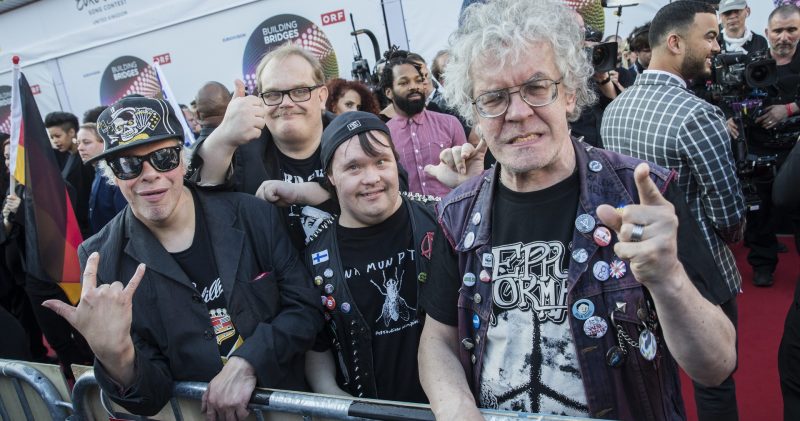 Pertti Kurikan Nimipäivät has decided to hold next year because the founder of the group than 60 years. In 2015 was the Finnish rock group, whose members all have intellectual disabilities, still one of the fads of the Eurovision song contest in Vienna.

Pertti Kurikanguitarist celebrates next year(far right in photo), its zestige birthday and that’s for the rock band that bears his name partly a moment to stop. Perrti wants on retirement. They will play a series of farewell concerts to thank their fans for all the support. The band was founded in 2009.

Bassist Sami Helle (second from the left in the picture) already has plans for the future. He hopes to be able to stand up in 2017 during the elections and would like to be elected. Helle is best relieved that there is now a quieter period is at hand. After the Eurovision song contest had the band members according to him no private life more and they had suffered from intrusive fans.

The end of the group is quite unexpected because the Eurovision song contest the men across Europe had put on a map. Pertti Kurikan Nimipäivä was tipped as one of the winners because they got a lot of attention by their unique occupation. Eventually, they were last in their semi-final with the song Aina mun pitää, the shortest song ever brought in the Eurovision song contest.

The rockers on stage in Vienna: