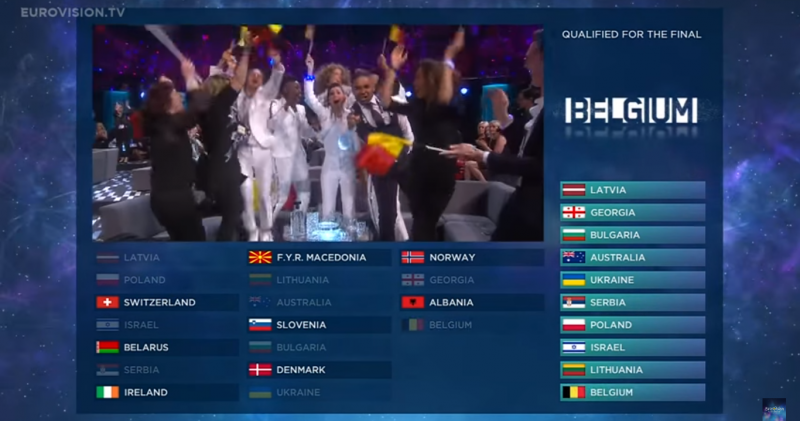 Figures from the VRT Research Department shows that the semifinals of the Eurovision Song Contest could already many Flemish people. On twitter it is reported that the peak rating above the 1.3 million viewers is located in Flanders.

The first broadcast of Tuesday night was the fifth most watched program on the Flemish television, with exactly 639,856 viewers and a market share of 30.3%. That means that of all Flemings who Tuesday between 21:00 and 23:00 televisiekeken, nearly a third to the Eurovision song contest. Compared to the other semi-finals in graph below seems this broadcast substandard to score. However, it is important to remember that Belgium since the introduction of the second semifinal in 2008 only once previously in the second semifinal was drawn, and that was-as the dip in the ratings shows-in 2011.

2,916,000 people in Netherlands saw how Douwe Bob a final place. That translated into marktaandeelvan 46.9%.

Logically the broadcast scored last night much better than the first in Flanders: in terms of total viewers ended up the second semifinal on a sigh of the million. 997,310 Flemish people older than four years were yesterday evening song festival. That made it Home after the most watched program of the day and made for a market share of 46.3%. The press service of the VRT on twitter that there on the peak moment-no doubt when Laura finally was announced as finalist-more than 1.3 million people watched:

In the table below you can see the comparison of the viewing figures for the second semifinal over the years. The list begins only in 2010 because the second semifinal in 2008 was tucked away on the digital channel One + and that of 2009 the top-10 of the ratings not pulled out. It should come as no surprise that the second semifinal yesterday-the first ever with a successful Flemish broke all records in terms of viewership in candidate number:

1,232,000 people in Netherlands still looked to the semi-finals without Douwe Bob, but with Laura Tesoro.

Final? Tomorrow night the final place, with both Belgium and Netherlands who participate. To a prediction for the viewing figures car we do not, but we can provide the latest applicable figures, to give an indication. 1,246,367 Flemish people saw last year how Loïc Nagashima fourth ended in Vienna, were no less than 5,149,000 Dutch in 2014 on the edge of their chairs to The Common to see silver claw Linnets. The figures of the final of this year we know Monday afternoon for Flanders and Netherlands for Sunday morning.