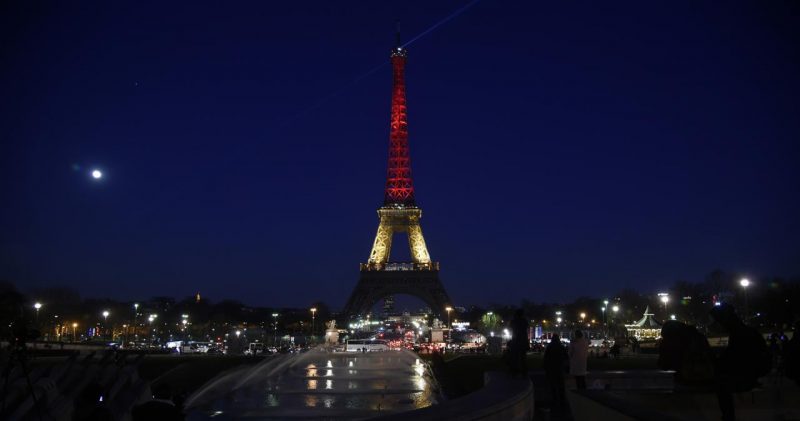 The world is in mourning following the tragic attacks that took place yesterday in our capital city of Brussels and at the airport in Zaventem. Our country gets lots of messages of support, including from Eurovision artists who often very big stars.

Famous landmarks like the Eiffel Tower in Paris, the facade of the Berlin’s Brandenburg Gate and the Burj Khalifa in Dubai yesterday evening were wrapped in our Belgian tricolor. Various world leaders support us and also celebrities as Adele, Kris Jenner, Harry Styles and Eva Longoria were sending loving messages into the world.

Singer Adele was Tuesday evening during her concert in London marking the attacks in Belgium. She wore her song “Make You Feel My Love on to the victims, Lara Fabian also brought tribute through its music. During her concert in Marseille she spent her special version of Voir un ami pleurer by Jaques Brel. Fabian is itself Belgian.

Our only Eurovision winner Sandra Kim left via twitter.

A lot of artists use instagram to a comforting picture or a symbol of peace in the world. So we saw images for come by Sakis Rouvas, Baker, Charlotte Perrelli, Iveta Mukuchyan, Piero Barone of Il Volo and Sanna Nielsen.

I thank God thy my sister is safe and has been re directed this morning. With her being a first officer with Brussels…

Europe is under a horrible attack. Makes me think of #Eurovision whose values are the exact opposite #ComeTogether #Brussels #JeSuisBelge

In addition to Sandra Kim and Lara Fabian also express other Belgian artists who ever participated in the Eurovision song contest their support. Tom Dice, Kate Ryan and Liliane Saint-Pierre let their emotions run free. Liliane wrote on facebook: “powerless in the face of so much hatred and senseless violence. Powerless in the face of the affected grief and the great loss of fellow human beings. However, I will not put off me and give in to anxiety, because then overcomes “lucifer”. My deepest sympathy to the victims and survivors. ‘

Do we shut down with the beautiful messages of our previous and current songfestivalkandidaat. Loïc Nagashima says we should be brave and our Laura Tesoro wonders aloud why all this is needed …