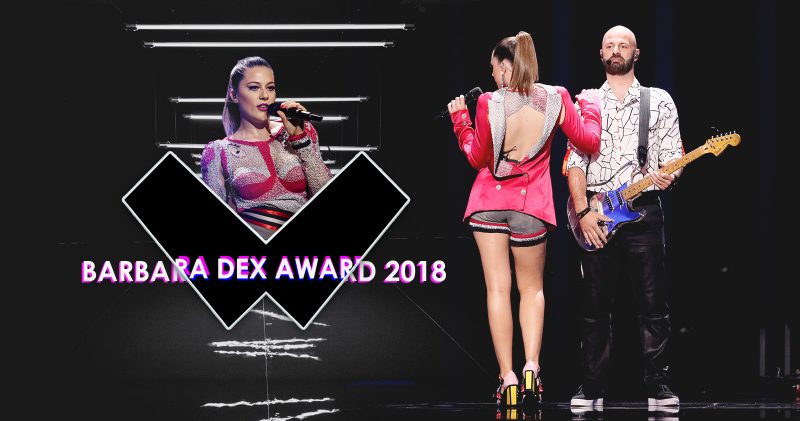 Eye Cue failed to qualify for the final of Eurovision 2018 in Lisbon with Lost and Found, but the Macedonian duo receive a prize nonetheless. They are awarded the (in?)famous Barbara Dex Award for the worst dressed artist of the past Eurovision Song Contest. Australia and Belgium come in second and third places.

Eye Cue obtained the highest amount of votes, mainly due to the outfit of female singer Marija Ivanovska. She started off her performance with a bright pink cape and tight shorts, the former of which was later on replaced with a top with a very interesting pattern. The shirt of Bojan Trajkovski is rather interesting as well … By the way, Eye Cue are the second Macedonian representatives to be awarded with the BDA. Back in 2005, singer Martin Vučić already scooped up the award.

Eurovision fans from all over the world voted Australia’s Jessica Mauboy and Belgium’s Sennek to the second and third places in the ranking. But the voting wasn’t exactly a nail biter: the Macedonians started off and held on to their lead with ease throughout the voting week.

It’s the second year running that the Belgian Eurovision website Songfestival.be has been granted the honour of organizing and handing out the Barbara Dex Award. Again, we received thousands of votes from all over the world.

The BDA is named after the 1993 Belgian Eurovision representative Barbara Dex. Her self-designed dress sparked a lot of debate – but not exactly in the most positive of ways! Check here the full overview of all past winners!