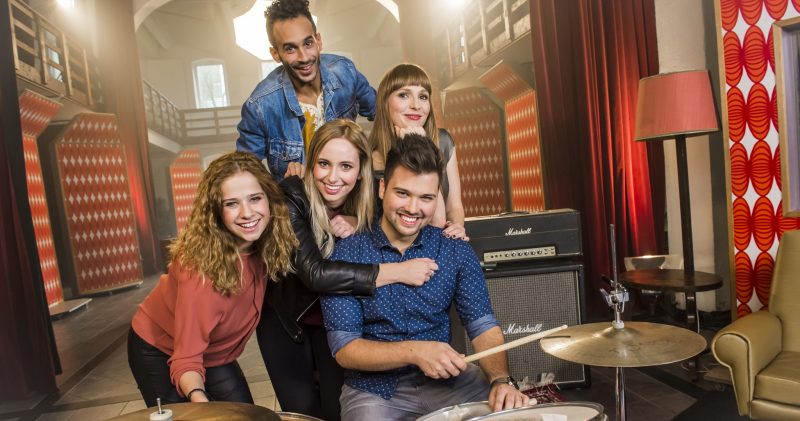 On 3 January 2016 was One the first of three live shows of eurosong 2016 broadcast. On January 17, exactly a year ago, Laura Tesoro with What’s the Pressure won the Flemish for round. The rest is Eurovision history. But how did the five candidates from then after their adventure in our preliminary round?

Laura Tesoro is not more of us television screen. But how did the other candidates? Chanting Astrid Decoste, Amaryllis Uitterlinden, Adil and Tom yet? They have a new single or do they have music all the way to the left?

Astrid Venu was a mysterious unknown when she took part in eurosong and unfortunately, there is not a whole lot has changed. The singer is currently working in Cuba Libre bar in Mechelen. But the job is rather a moonlighting for when they are not busy with music. She worked regularly during the past year together with Jason Ives to songs they via YouTube, Soundcloud and social media promote.

‘ We are all five much with music and song in progress “Astrid” trusted us. ‘ But that is completely separate from VRT. They had us promised a recording and to promote and to follow us well, but there is not. At least not for me. ”

Remember Amaryllis Uitterlinden and her theatrical act with Kick the Habit yet? She was a favorite for victory in eurosong 2016, but stranded in fourth place.

Or Amaryllis much music is and whether we can expect a new single, is not known. On the social media of the singer and actress is the icy still. What we do know is that her looks she lent to the campaign by the hair salon of showbiz hairdresser Karine Uvijn in the West-Flemish Tielt.

The past year seemed Amaryllis her preference more on acting than singing. This year were films of a three-year canned film workshop. It involves seven projects that resulted in The Magnificent In that short film festival on 16 december in Heist-op-den-Berg. Amaryllis appeared in one of the movies.

Adil has also not idle. He is currently signed to continue singing and occur throughout the year. After eurosong 2016 he went to London to work with Will Knox, the man who wrote songs for Dotan and Laura Tesoro. They wrote together his second single Take Me With You, that he might accomplish the summer they even live in the Q-Beach House in Ostend.

In the meantime, he already has a third single. Repeat (That Summer) is funky, exciting and just slightly stouter than the previous single with a warm, romantic ruffle ‘, it sounds. “I am extremely happy with my new single. The song comes at the right time, after a long summer that still should take just a little longer, “he said then.

About Tom Frantzis was a year long incredibly silent. Until last week. When he released his second single, Facing Changes, out. And eurosongwas number I’m Not Lost just compared with one of the new singles by Ed Sheeran, Castle on the Hill.

It seemed just that Tom just this year at what covers would love to hear a new work and we would get. In november, a record deal was signed to Warner Music. Facing Changes still must conquer a place in the charts. And if we are to believe Tom is there are still some new work

Well, where should we start? After she was tenth in the Eurovision Song Contest has Laura Tesoro not inactive. The spring-in-‘t-field is really impossible to save our television screen.

New music we have not yet been told, but Laura is very busy with her present work, and also some acting. So if they leave for Trolls and voices for the new Disney movie Vaiana. Thanks to her role in Trolls if they even to London to make her big Idol Justin Timberlake to interview. In the Eurovision song contest in Stockholm he was the interval act during the final show, but when the two were just not the chance to meet each other. That they have to this so double thick and well made.

Acting, interviewing and … present. Also it shows one of Laura’s talents. So she made her present to debut this fall on the side of Koen Wauters in Belgium’s Got Talent. And this spring is to see them as presenter of a brand new talent contest, The Band. She presents the program together with Niels Destadsbader and Jim Bakkum. The recordings are all in full swing. More good news for Laura: they will show as coach in The Voice Kids.

Yet she has on a musical level not inactive. The singer last week that gave them to a new single works. Laura should also occur during the most recent edition of Night of the Proms, as the youngest artist ever. And What’s the Pressure earned her nominations at for some prices. So she got the Radio 2 summer hit award for Best no Dutch Number and she is nominated for the Mia for breakthrough of the year.

Also on a personal level it went her in 2016 for the wind: they went in together with her friend Giovanni, names together in a kitten home and have a popular reisvlog, Thu.

If not yet the year 2016, 2017 that Laura’s Tesoro was certainly. The other candidates should do it with much less. It is not clear why public broadcasting their plans with the losing finalists does not. Now let’s hope that Blanche in Laura’s footsteps and it does at least as well in Kiev.