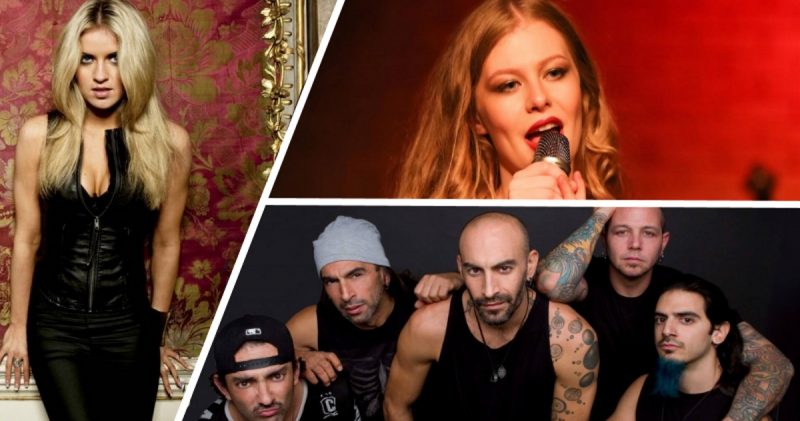 On this second rehearsal day enter the countries of the second half of the first semifinal and host country Sweden stage. In this article you read about the first rehearsals of the artists from the Czech Republic, Cyprus and Austria.

Singer Gabriela Gunčíková sings her ballad in a white dress that consists of two parts, with a very different top and bottom part. She also carries a striking necklace with white bulbs. The stage is dominated by blue and purple triangles that change in all sorts of sequences to the beat of the song, and after the last I Stand bathes the singer in a flower field, just as in the video clip. The camera work still has some significant improvements, but Gabriela’s vocal performance sit on this first rehearsal more than good.

The five-Member group Minus One has a striking podiumact, with the three guitarists and the drummer behind bars on stage. The lead singer is central on the stage. The flashy camera work with numerous short shots-that make a lot more dynamic-static action is interspersed with video images of wolves. Just before the last refrain, where the guitar players come out of their cells, the singer also still a moment to cry like a wolf. It seems as though Minus One to outsmart the Belarusian Ivan wants to be. Vocally, there is still room for improvement.

Zoë start with a dark blue stage and a salmon pink dress. Soon becomes the stage, in analogy with the video clip, a lot more colorful. Vocally this is very solid, and the singer knows the cameras and so the viewers at the first rehearsal for a very good find. The only problem is that they are alone on stage and no progress at all, giving the whole fin very static. Loin d’ici is the only fully Francophone song of this year. Or that in the advantage or disadvantage of the Austrians will play remains to be seen.